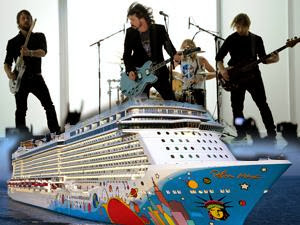 The Foo Fighters, Imagine Dragons and the Roots will lead the Bud Light Hotel's stacked Super Bowl XLVIII weekend concert lineup, set to take place in New York City across the street from the hotel's unique location... a cruise ship docked on the Hudson River.

The recently reassembled Foo Fighters will play February 1, 2013 the night before the big game, along with the Zac Brown Band, whose new record was produced by Foo frontman Dave Grohl.

The Bud Light Hotel's festivities are slated to kick off January 30, 2013 with the Roots curating and headlining a tribute to New York hip-hop, with the group performing alongside Run-D.M.C., Busta Rhymes and other rap luminaries.

Imagine Dragons will play the following night as part of the Pandora Presents party. MORE HERE