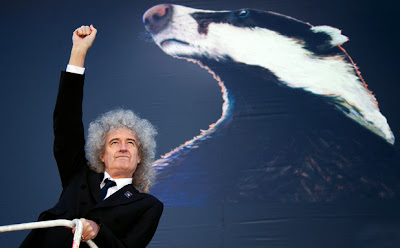 Queen guitarist Brian May is today celebrating a victory in his campaign against badger culling.

Only 708 of the animals were shot by (British) Government marksmen during the original six-week cull in Gloucestershire in a bid to reduce the risk of bovine tuberculosis.

Although an extension was granted, a shoot due to take place Saturday November 30, 2013 was cancelled.

Guitarist May, 66, said: “The extension should never have been allowed. We mourn the badger lives lost and give thanks for those still with us.” MORE HERE & HERE

Email ThisBlogThis!Share to TwitterShare to FacebookShare to Pinterest
Labels: brian may, queen