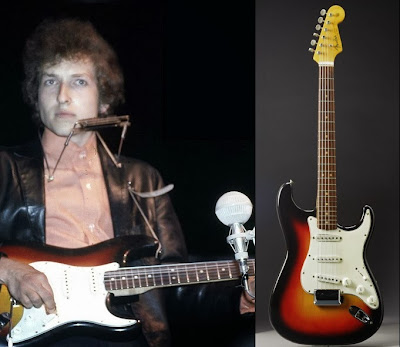 Bob Dylan's Sunburst Fender Stratocaster made rock history when he played it at the 1965 Newport folk festival. Almost 50 years later, the instrument made another "moment" at an auction in New York on Friday December 6, 2013 when it sold for nearly $1 million – the highest price ever paid for a guitar at auction.

The previous record for a guitar sold at auction was Eric Clapton's Fender, nicknamed Blackie, which sold at Christie's for $959,500 in 2004.

The guitar has been in the possession of a New Jersey family for nearly 50 years. Dylan left it on a private plane piloted by the owner's late father, Vic Quinto, who worked for the musician's manager.
Dawn Peterson said her father asked the management company what to do with the guitar and nobody ever responded. MORE HERE & HERE

Last year, she took it to the PBS television show History Detectives to have it authenticated. Two Dylan memorabilia experts unequivocally declared it to be Dylan's guitar. Watch the episode HERE
Posted by CDMartini at 9:55 AM