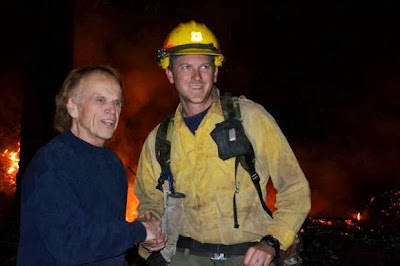 One of Big Sur's most famous residents, musician Al Jardine of The Beach Boys, thanked the 1,000 firefighters who corralled the Pfeiffer Fire and prevented it from spreading to his home.

Jardine's ranch is perched above Wreck Beach and is extremely close to where the wildfire broke out in Los Padres National Forest Monday December 16, 2013.

Twenty-two homes scattered in the 900-acre fire's path burned to the ground. Luckily for the "Surfin USA

" singer, flames never spread far enough west toward the ocean to reach him.

“Thank you all for the positive messages and prayers,” he wrote Wednesday morning (December 18, 2013). “We are okay for now. Everyone is evacuated but us and a few other souls.”

Jardine decided to not evacuate. Instead, he stayed put with firefighters as they worked in extreme conditions. MORE HERE
Posted by CDMartini at 9:38 AM