Take Me To The Land Of Hell Yoko Ono 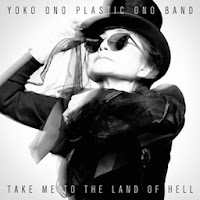 Yoko Ono, who turned 80 this past February (2013), baffled rock audiences when she released her first album, “Yoko Ono/Plastic Ono Band

But when you hear it today, it’s easy to recognize it as proto-punk — the bridge between the Velvet Underground and Patti Smith. And while her vocals grated on ears more accustomed to classic rock back in the ‘70s, she’s right at home in the post-alternative rock age, where her avant-garde approach is seen as an asset, not a liability.


Her new album, 'Take Me to the Land of Hell

' (to be released September 24, 2013) is jointly credited to Ono and the current edition of the “Plastic Ono Band,” which features her son Sean Lennon, among others, and also includes guest appearances by Lenny Kravitz, as well as Adam Horovitz and Mike D of the Beastie Boys, who bring their programming and remixing skills to “Bad Dancer.”