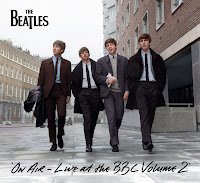 A second volume of hugely successful Beatles 'Live at the BBC

' collection has been officially announced.

The original collection of recordings was released in 1994, hitting Number One in the UK charts and selling more than five million copies worldwide within its first six weeks of release.

' will be released on Monday, November 11, 2013 (as well as a remastered version of 'Live At The BBC


The double album will contain 63 tracks in total – none of which appear on the original collection. Some 37 previously unreleased performances will feature, as well as 23 previously unreleased recordings of in-studio chat between the band and BBC radio hosts. MORE HERE
Posted by CDMartini at 10:44 AM

Email ThisBlogThis!Share to TwitterShare to FacebookShare to Pinterest
Labels: bbc, live at the bbc, on air-live at the bbc volume 2, the beatles