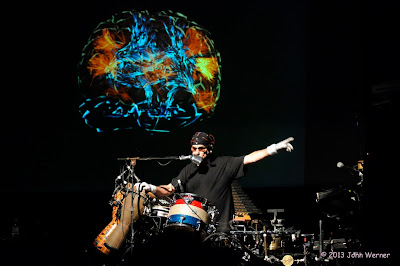 Peering inside our mind and capturing images of our thoughts has become a preoccupation in much of neuroscience. It's also an unlikely part of the light show at a Mickey Hart Band concert.

Yes, the musician best known as the percussionist for the Grateful Dead for more than 20 years jams with a light show powered by his mind.

Hart has a lot to be happy about. At nearly 70, he's still healthy and still touring. On his most recent album, 'Superorganism', and in his upcoming concert tour, Hart dons a goofy black cap studded with electrodes. The cap — and EEG data it derives from Hart's brain — drives his concert's light show. At the concert, images of Hart's brain soar 40 feet in the air and change color to reflect different types of brain waves detected by the EEG. NPRs All Things Considered story is HERE

MORE HERE
Posted by CDMartini at 11:55 AM