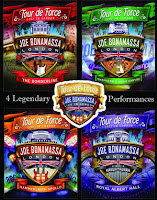 ) in the English capital. The idea for each night was to play songs he’d never played live before.


Each night will be available as double DVD and Blu-ray sets, and there’s a Collector’s Box Set

featuring all four shows plus a hardback book, delivered in a box that looks like a Marshall amp.


The Tour De Force – Live In London sets are released by Provogue Records on October 28, 2013. And Joe Bonamassa’s not done in Europe – he starts a European tour with a series of U.K. dates this month. MORE HERE