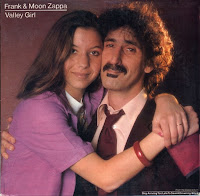 September 4, 1982 : Frank Zappa's single "Valley Girl" reaches #32 on the US Billboard Hot 100. This marks the sole time Zappa charted in the Top-40 in the United States, despite being an international hit abroad and producing a career total of 62 albums in his lifetime.

Frank Zappa : Ship Arriving Too Late to Save a Drowning Witch

Posted by CDMartini at 9:33 AM