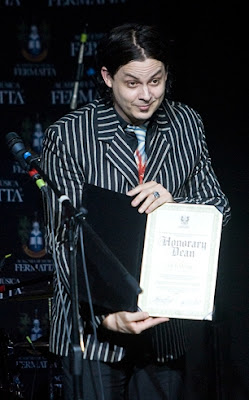 Jack White has been named an Honorary Dean at the Fermatta Music Academy in Mexico City. On August 22, 2013 the rocker made a surprise appearance at the Academy's 20th anniversary celebration to give a speech on his family, the influence of Detroit on his life and the technical aspects of songwriting.

White was also given a Lifetime Achievement Award at the ceremony. He's the first musician to be awarded the Honorary Dean title in the history of the Academy. MORE HERE

Loretta Lynn says she wants to make another album with Jack White. MORE HERE
Posted by CDMartini at 9:52 AM