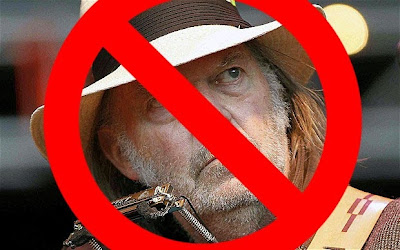 A Fort McMurray, Alberta rock radio station stopped playing Neil Young’s music for a day after he compared the northern Alberta oilsands city to Hiroshima after the atomic bomb.

On-air personality Chris Byrne at Rock 97.9 then asked his listeners if the ban should be extended indefinitely.

Neil supporters were in the majority, but when station staff looked at their email addresses, most came from out of town. So with local opinion firmly against him, Young has been pulled from the station’s playlist.

Byrne had declared Wednesday (September 11, 2013) to be a “No Neil” day after a news conference Young held the previous day in Washington, D.C. where Neil declared Fort McMurray to be a wasteland. MORE HERE & HERE
Posted by CDMartini at 9:54 AM