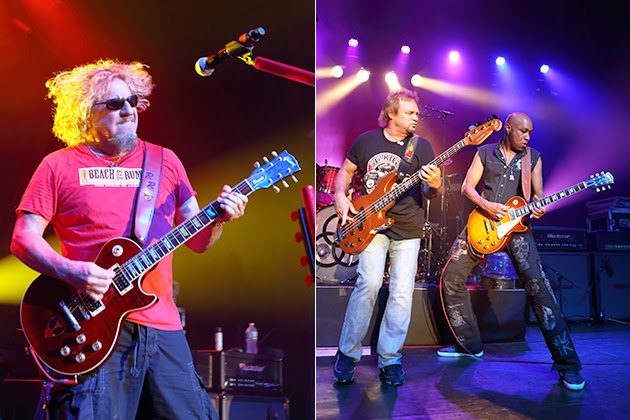 If there is indeed only one way to rock then Sammy Hagar is a true virtuoso at the craft. For his latest touring project, ‘A Journey Through the History of Rock,’ the Red Rocker has assembled his own motley crew of insanely talented musicians who have hit the road, educating the masses in the best way humanly possible: with a down and dirty rock show.

The show is a feast for classic rock fans offering up a smorgasbord of tunes from Hagar’s solo catalog and Montrose days, smash hits from his tenure with Van Halen and a handful of classic Led Zeppelin tunes. Helping him pull it all off is good friend and former Van Halen bandmate Michael Anthony on bass, Jason Bonham, son of legendary Led Zeppelin drummer John Bonham on drums and Vic Johnson from the Waboritas joining Hagar on guitar.

Whether fans fell in love with Hagar during his solo career or during his stint with Van Halen, it’s doubtful anyone anticipated the intensity with which he attacked the Led Zeppelin songs. MORE HERE