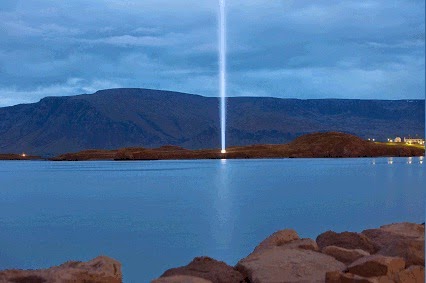 The Imagine Peace Tower, an artwork by Yoko Ono on Viðey island off the coast of Reykjavík Iceland, was lit last night (August 7, 2014), earlier than usual, in memory of the at least 408 children killed in the conflict at Gaza in recent weeks.

“As all of us are devastated by the loss of so many lives of innocent children in the Israeli/Palestinian conflict, I will be lighting Imagine peace tower on, Thursday August 7 (2014), hoping that the ceasefire will continue indefinitely, and no more innocent children will be harmed,” said Ono on her Facebook page. MORE HERE