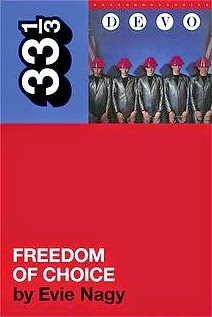 Devo's Freedom of Choice
By Evie Nagy
Coming May 2015

Part of the 33 1/3 series of books about important albums.

Evie Nagy, who will be bringing her substantial rock critic chops to bear on Devo’s Freedom of Choice

. Nagy is the Music Editor at Billboard Magazine, has past written for Rolling Stone, and co-wrote the afterword to the excellent Out of the Vinyl Deeps

was her record of choice because it’s the point, Nagy asserts, when Devo became Devo. Freedom of Choice made them curious, insurgent superstars, vindicated but ultimately betrayed by the birth of MTV. Their only platinum album represented the best of their un-replicable code: dead-serious tricksters, embracing conformity in order to destroy it with bullet-proof pop sensibility. MORE HERE & HERE