Book Explores Yet Another Side of Bob Dylan 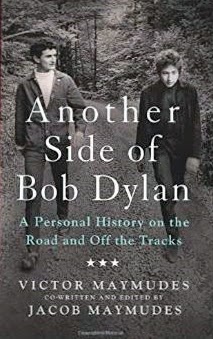 On a bright, cool afternoon in July, Jacob Maymudes sat on the deck of the small guesthouse he rents in the Los Feliz neighborhood in Los Angeles, reflecting on the strange journey of his first book, “Another Side of Bob Dylan

,” which will be published on September 9, 2014 and has already excited interest.

He was 7 when he first met Mr. Dylan, at the back lot of Universal Studios. Jake was with his father Victor, who was continually on the road with Mr. Dylan, carrying out an assortment of essential backstage assignments: as tour manager, chauffeur and body man, not to mention chess-playing companion.

“Another Side of Bob Dylan

” is an unusual addition to the giant Dylan oeuvre, the quirky stepchild of Mr. Dylan’s own looping narratives. One thread is an intimate, conversational account of Victor’s tempestuous friendship with Mr. Dylan. But the most vivid passages go back further... MORE HERE

Email ThisBlogThis!Share to TwitterShare to FacebookShare to Pinterest
Labels: another side of bob dylan, bob dylan, jacob maymudes, victor maymudes