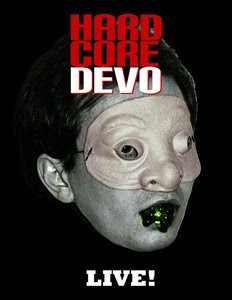 The weird rockers of the red ziggurat-shaped hats are making a live concert film, with the assistance of filmmaker Keirda Bahruth, called DEVO – Hardcore Live. On their current ‘Hardcore Tour,’ the band is diving back into the annals of their music to the very beginning of their life as a band.

They filmed a performance from June 28, 2014 at the Fox Theater in Oakland, California which will be released on DVD, Blu-Ray, and vinyl and PledgeMusic backers get all sorts of behind-the-scenes goodies. source