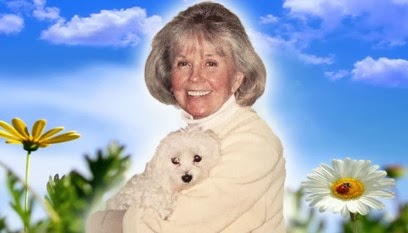 Recording star and screen legend Doris Day is celebrating a landmark birthday with an auction to benefit her favorite cause: animals.

Her nonprofit Doris Day Animal Foundation will mark her 90th birthday (April 3, 2014) with a bash in Carmel, California.

A sold-out fundraising celebration at Day's Cypress Inn will include a doggie fashion show, adoption event and an tribute dinner for fans and friends on April 4, 2014.

Items autographed by Day and celebrity pals including Paul McCartney and Tony Bennett will be auctioned off online and at the dinner. Online bidding ends April 1. 2014.

In a statement, Day said she doesn't care much for celebrating birthdays with cards or gifts, inviting fans to help animals instead. As Day put it: "I'm all about the four-leggers." MORE HERE

AND ...there are a couple of special CD releases and talk a digital-download of  all of her original Columbia studio albums of the 1950s and 1960s (we'll keep you posted). There is a Deluxe TCM Vault Collection issue of Doris' 1960 thriller 'Midnight Lace', which has never before been released on DVD in the U.S. has indeed be released. GO HERE

AND...Paper Studio Press is honoring her with a special paper doll book, spotlighting not only Doris Day, the star, but also her passionate devotion to animals. A portion of the proceeds from the sale of every book will be donated to the Doris Day Animal Foundation. GO HERE

MORE HERE
Posted by CDMartini at 8:14 AM