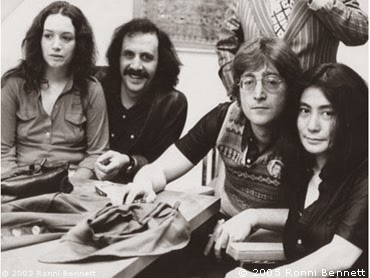 During a trip to the United States (June 6, 1971), John & Yoko made an appearance on Howard Smith's WPLJ radio talk show to improvise a 'happening' with audience participation, Smith then took them along to see Frank Zappa who was staying at a nearby hotel and as a result of that meeting they joined Frank Zappa and the Mothers of Invention on stage that very night to perform live at New York's Fillmore East.

Two days after the Zappa gig (June 8, 1971), Alex Bennett interviewed John and Yoko as well as inviting listeners to call in with their own questions.That interview was posted yesterday (June 8, 2014) on "Rob Alfano's GABnet REWIND". Listen to the interview HERE

Posted by CDMartini at 8:57 AM