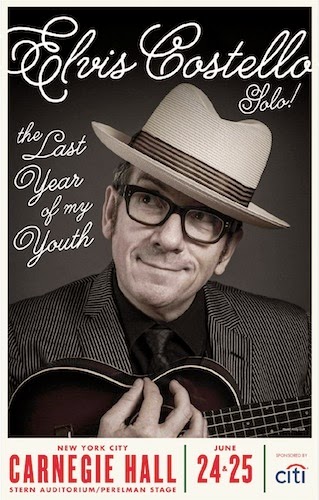 If Elvis Costello had dived any deeper into his catalog for his solo concert on Tuesday (June 24, 2014), opening a two-night stand at Carnegie Hall, he would have needed scuba gear. It wasn’t the kind of solo show by an established rocker that treats a bunch of old favorites as guitar-strumming singalongs for longtime fans. The hall was often silent as Mr. Costello offered something else: a continuing, challenging, intimate engagement with his songs, old and new.

At Carnegie Hall, the ovations that tend to greet familiar opening chords were scarce and muted. Mr. Costello played plenty of songs that were originally tucked within his 21st-century albums, un-apologetically  stacking them up alongside material from his 1970s and ’80s radio heyday. When he got around to his more widely circulated songs, he reworked them ruthlessly: stripping away pop enticements like intros and instrumental hooks, magnifying dynamic ups and downs, illuminating each lyric anew. MORE HERE