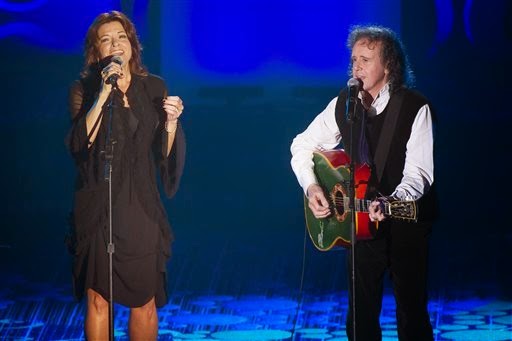 She sang her father's "I Still Miss Someone" to honor BMI President Del Bryant — where she grew emotional — and she performed "Catch the Wind" with Donovan (above right) following his induction.

A death in Ray Davies' family didn't allow the singer to attend the induction Thursday, but Jon Bon Jovi closed the three-hour event by performing Kinks hits such as "You Really Got Me" and "All Day and All of the Night." MORE HERE & HERE
Posted by CDMartini at 8:31 AM

Email ThisBlogThis!Share to TwitterShare to FacebookShare to Pinterest
Labels: bmi, catch the wind, donovan, i still miss someone, jon bon jovi, ray davies, rosanne cash, songwriters hall of fame, the kinks, you really got me