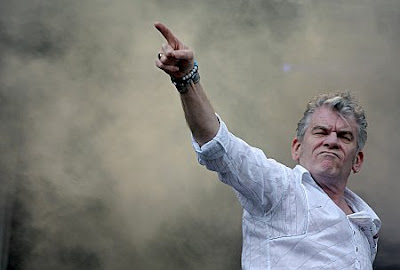 Nazareth's lead singer, Dan McCafferty, was only 30 seconds into the first song of the band's Tuesday night (July 9, 2013) show at the Cranbrook Curling Centre in Cranbrook, Canada when he collapsed to the stage.

According to The Cranbrook Daily Townsman, Nazareth didn’t walk onstage until 90 minutes after the concert was scheduled to begin. They didn’t start their opening song until 11PM, but they didn’t get far. Apparently McCafferty, 66, wasn’t getting enough air to his lung.

While no further information is available on McCafferty's condition, the balance of the band's Canadian tour, which was scheduled to run through July 27, 2013 has been cancelled.

The band recently posted a statement on their website denying rumors they were breaking up. MORE HERE
Posted by CDMartini at 10:05 AM