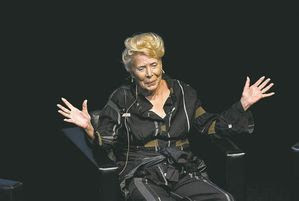 Joni Mitchell says she doesn't want anything to do with a museum or tribute in her hometown of Saskatoon. The singer-songwriter is reportedly fed up that plans to honour her musical legacy in the city have fallen through, partially due to financial constraints.

Mitchell spoke candidly about the city where she spent her teenage years in an article published in the Saskatoon StarPhoenix. Her comments come after a local group has informally tried to come up with ideas, once again, to honour the singer.

Jeremy Warren, the StarPhoenix reporter who spoke with her, said she thought the city failed to honour her. "It's time to retrieve everything," she said. "All I want is my stuff back. I just want my stuff back. I have a place to store it. It won't be of any use to Saskatoon." source
Posted by CDMartini at 9:32 AM