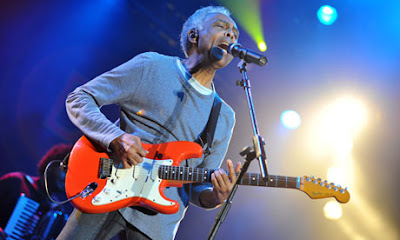 Gilberto Gil may be 71 but he danced on to the stage, clutching a red guitar, fronting a band featuring accordion and fiddle.

Brazil's most celebrated and versatile veteran performer closed Womad 2013 with a jaunty Brazilian folk-rock set that included forro songs that he recorded for the film Eu, Tu, Eles, along with Expresso 2222, which he wrote in London in the 70s when he was exiled by Brazil's military government, and Bob Marley songs, a reminder of the role Gil played in popularizing reggae in Brazil. MORE HERE

Gilberto Gil embarks on a globetrotting tour of the indigenous musics of Brazil, Australia and South Africa in a new documentary entitled 'Viramundo'.