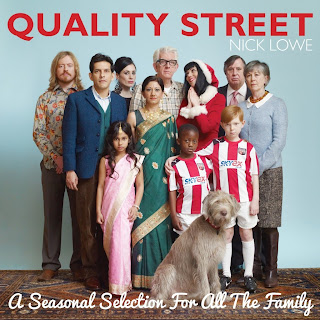 We can stop holding our breath...Nick Lowe has let the surprise outta the bag.

Lowe is tackling a music foreign even to his iconic discography by announcing the release of his first holiday album, Quality Street: a Seasonal Selection for All the Family

Much like that time you got to open presents on Xmas Eve, Lowe is gifting the world with an exclusive, 24-hour-only stream of the album.

Pre-order the CD/LP now at the Yep Roc store for exclusive merch bundles, including: Holiday greeting card set and a Snow Globe for delivery on or before October 29, 2013. And if you buy one for your favorite Nick Lowe fan (or yourself), you can have it wrapped in exclusive Nick Lowe wrapping paper!

Email ThisBlogThis!Share to TwitterShare to FacebookShare to Pinterest
Labels: nick lowe, quality street: a seasonal selection for all the family, yep rock records