No Parole For Pussy Riot 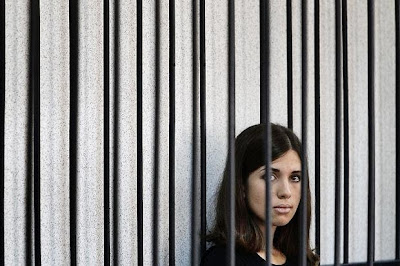 A second member of the Russian punk protest group Pussy Riot has had her application for parole refused.

A court ruled that Nadezhda Tolokonnikova had not repented for her crime of hooliganism after singing a protest song against President Vladimir Putin in Moscow's main cathedral.

A similar ruling was delivered against Maria Alyokhina.

Both women are due to be released from their penal colonies next year; both are eligible for parole already. MORE HERE & HERE

Amnesty International
They were turned down earlier this year, and immediately appealed.
Posted by CDMartini at 10:36 AM