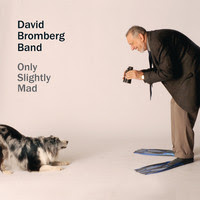 David Bromberg's storied career has included collaborations with some of the biggest names in music – Bob Dylan, George Harrison, Jerry Garcia and Jerry Jeff Walker, just to name a few.

On September 24, 2013 he'll add another LP to his solo discography, Only Slightly Mad

. Now you can take an exclusive first listen to album cut, "Nobody's Fault But Mine," a traditional gospel number that Bromberg's turned into a mid-tempo blues wailer marked by saintly but somber organ work from Brian Mitchell and Bromberg's voice, which runs as ragged as his guitar. source

Bromberg recorded the song before ...hear that version HERE