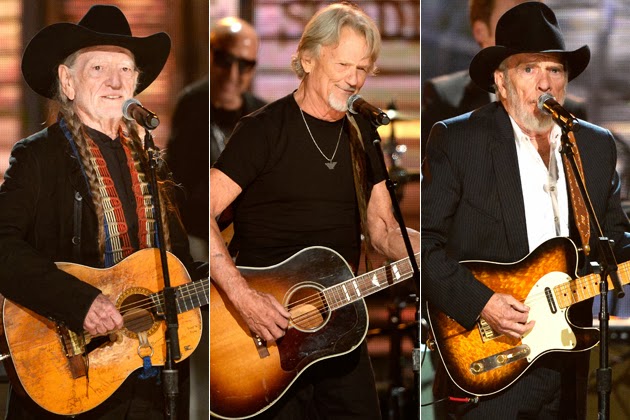 Willie Nelson (above left), Kris Kristofferson (above center) and Merle Haggard (above right) brought the house down at the 56th GRAMMY Awards on Sunday night (January 26, 2014), and it's looking like the trio of country music legends will carry that momentum back to the recording studio.

Before they performed "Highwayman," "Okie From Muskogee" and "Mamma's Don't Let Your Babies Grow Up to Be Cowboys" -- the latter inspired the likes of Sean Lennon and Yoko Ono to stand and sway -- the icons said a collaborative album is in the works.

While they do have shared histories, the three have never collaborated on the same record. Nelson is the common thread, having worked with Kristofferson in The Highwaymen and with Haggard on 1983's chart-topping "Pancho & Lefty." Kristofferson and Haggard toured together in recent years. MORE HERE

Posted by CDMartini at 8:39 AM