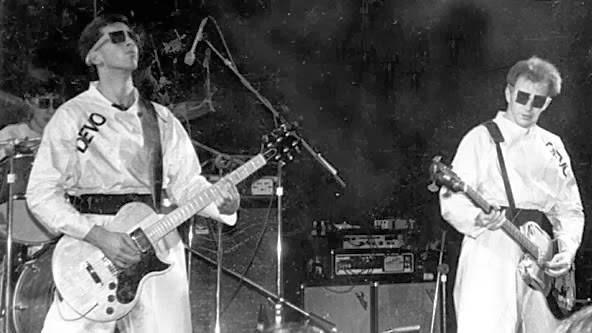 The stunning news that Devo guitarist Bob Casale (above left) passed away from heart failure last week was as shocking to the band as it was to their fans. Nobody was as devastated as Jerry Casale (above right), his brother and bandmate of 40 years. Jerry spoke to Rolling Stone magazine about Bob's life and legacy.

Excerpt : "I had four siblings, but Bob was my closest brother in age. We were born four years apart and we bonded very, very early on. We also loved the same sort of music when we were young. We got really great radio stations out of Detroit, so we were listening to a lot of Motown and R&B and Chicago blues. That was our true love other than big pop music hits like the Rolling Stones and the Beatles and Kinks and James Brown."

"We hooked up as musicians when I was in graduate school. We started talking about these Devo concepts and I started infecting him with the Devo bug. Mark Mothersbaugh and I got serious about our concepts so we enlisted our brothers. I talked my brother Bob into it and Mark talked his brother Bob into it. Suddenly, we were a real band." Read it HERE

Lots of friends & fans of DEVO have been asking how they can send condolences/gifts to the Casale family after the untimely passing of Robert "Bob 2" Casale. A funding page has been created to help soften the huge blow this has been to his wife, daughter, and son. All gifts will go directly to The Casale Family. GO HERE
Posted by CDMartini at 8:14 AM