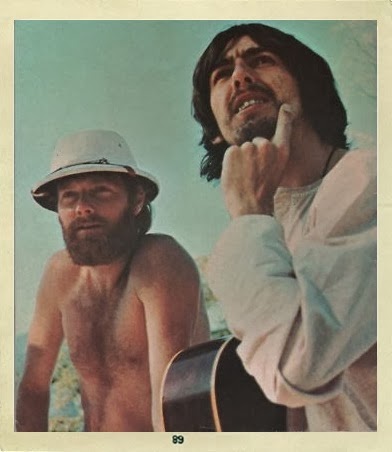 On what would have been his 71st birthday, George Harrison (above right) gets honored by friend and fellow musician Mike Love (above left) on the previously unreleased track "Pisces Brothers."

Written in 2004, but released for the first time today (February 25, 2014), "Pisces Brothers" was inspired by a trip the Beach Boys co-founder and the Beatles took to India in 1968 to learn from the spiritual teachings of Maharishi Mahesh Yogi.

"This being the 50th anniversary of The Beatles coming to America, I wanted to commemorate this incredibly significant trip we all took together to India, at the Maharishi’s invitation," Love said in a statement. "It was enormously influential on all of us, most especially George. The song is really sentimental for me, and meant to honor George Harrison’s remarkable contribution to music. And how, in this one moment in time, we got together, as the song says, not fortune or for fame, but for enlightenment.” MORE HERE

Posted by CDMartini at 8:54 AM