White Stripes Live Under Lights Of The Rising Sun 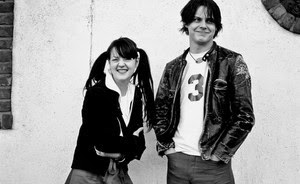 A new live album from The White Stripes will be released through Jack White's Third Man subscription service later this year (2014).

'Live Under The Lights Of The Rising Sun' was recorded during the duo's first visit to Japan in October 2000 and will feature 31 tracks including covers of 'I'm Bored' by Iggy Pop and Screaming Lord Sutch's 'Jack The Ripper' plus an early version of 'Dead Leaves And The Dirty Ground'. The album will be the 21st release from The Vault subscription service offered by White's Nashville-based label.

The live LP will include both performances in full plus unseen photos taken during one of the shows and a die-cut, gatefold jacket. A snippet of 'Hello Operator' from the album can be heard below. MORE HERE

Posted by CDMartini at 8:30 AM