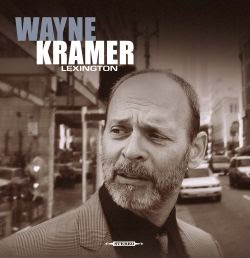 In the spring of 2014, singer-guitarist Wayne Kramer – formerly of the Detroit revolution-rock band the MC5 – hit a weird milestone, his first Top Ten album. Lexington

, credited to Kramer and the Lexington Arts Ensemble, is an all-instrumental record; it was Top Ten on Soundscan's traditional jazz chart; and it is anything but traditional.

is fiercely progressive jazz, recalling Kramer's late-Sixties avant-jamming nights with the MC5. The album is also a soundtrack, Kramer's score to a new documentary, The Narcotic Farm, about the pursuit of creative freedom inside an institution the guitarist knew painfully well: the federal penitentiary in Lexington, Kentucky. MORE HERE