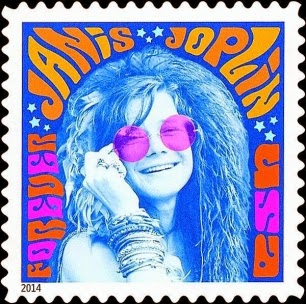 Weeks before Janis Joplin is scheduled to join Jimi Hendrix on the list of new honorees in the U.S. Postal Service’s Music Icons series of commemorative stamps, we’ve been granted our first glimpse of what the artwork will look like.

The Music Icons series is slated to include a wide variety of properly iconic artists, starting with Hendrix — whose stamp debuted in the spring — and continuing through Joplin, John Lennon, Jim Morrison, and Roy Orbison, as well as a number of performers outside the rock arena.

We still don’t know the specific release date for Joplin’s stamp; the Postal Service intends to have it out sometime in August 2014. MORE HERE & HERE
Posted by CDMartini at 8:48 AM