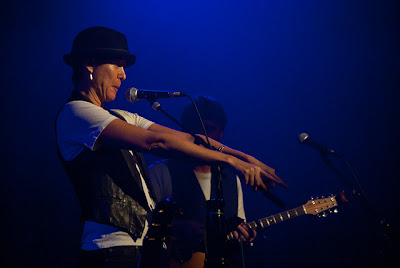 Michelle Shocked, a controversial singer and born-again Christian, is under fire for her anti-gay tirade during a concert on Sunday night March 17, 2013 in San Francisco.

Witnesses say she told the crowd at Yoshi's, "When they stop Prop 8 and force priests at gunpoint to marry gays, it will be the downfall of civilization, and Jesus will come back," and "You can go on Twitter and say, 'Michelle Shocked says God hates fags.' " The staff at the venue finally turned off the stage lights and pulled the plug on her performance.

The Twittersphere reacted, and so did the promoters of most of her upcoming scheduled performances.

Shocked felt the lightning quick power of the Gay/Bi/Lesbian/Trans, Internet and show booking communities after her entire US tour through May 5, 2013 was canceled, leaving only one Madison, Wisconsin. MORE HERE, HERE & HERE

There's even a bit of a backlash on her youtube channel (see comments) HERE
Posted by CDMartini at 10:35 AM