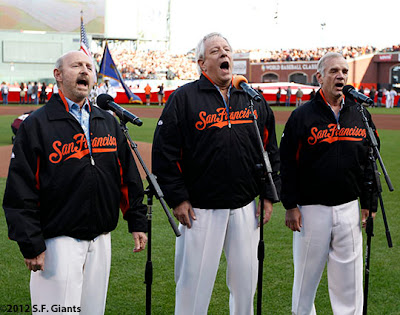 In Game 6 of Major League Baseball's National League Championship Series, the San Francisco Giants took pains to ensure that all sorts of musical tastes were represented at the McCovey Cove Center for the Performing Arts.

The current version of The Kingston Trio sang "The Star Spangled Banner," James Hetfield of Metallica gave a rousing pep talk and even rapper Lil Wayne sang 'Take Me Out To The Ball Game'.

source
Posted by CDMartini at 7:01 AM