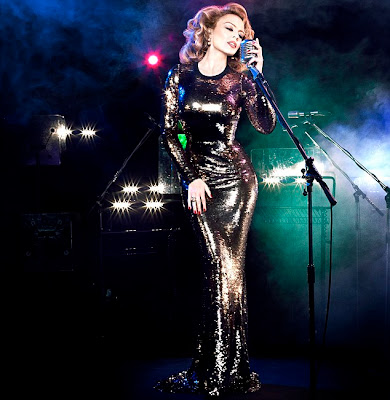 Kylie Minogue looks sultry in a gold dress as she launches her new album in celebration of 25 years in the music industry.

Kylie marks her silver anniversary by revisiting her back catalog with the help of an orchestra and an Abbey Road studio. MORE HERE

In 1996, the Australian pop-star traded in her cheerful pop songs for a dark duet with Nick Cave called “Where The Wild Roses Grow.” Now 16-years later, the unlikely pair teamed up again to re-record the melancholic song for Minogue’s new album. MORE HERE

In celebration of her 25th anniversary in music (christened K25) has seen the singer request fans to tweet 'blast from the past' photos to share with her followers. See them HERE