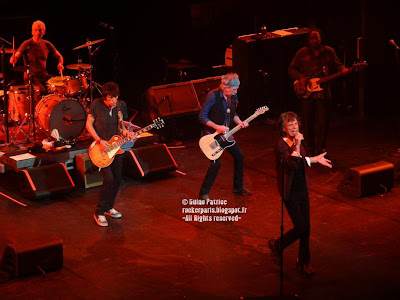 The rock legends tore through 12 tracks at the 1,800 capacity venue le Théâtre Mogador, playing hits including 'Tumbling Dice', 'It's Only Rock 'N' Roll (But I Like It)' and 'Honky Tonk Women'.

The gig follows the band's first performance in over five years last Thursday (October 25, 2012) at the tiny 600-capacity La Trabendo venue. The Stones hadn't played together since August 2007, when they finished up their two-year Bigger Bang tour. MORE HERE

Pics HERE
Posted by CDMartini at 8:06 AM