Elvis & Lisa Marie Love You Because 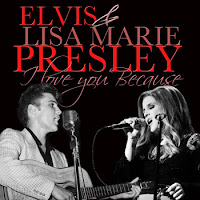 Lisa Marie recorded her vocals to the song on August 8, 2012 at The Village in Santa Monica, Calif., after consulting with producer T-Bone Burnett who presented her with the idea of "I Love You Because" as a special song for her fans. Available HERE
Posted by CDMartini at 8:43 AM