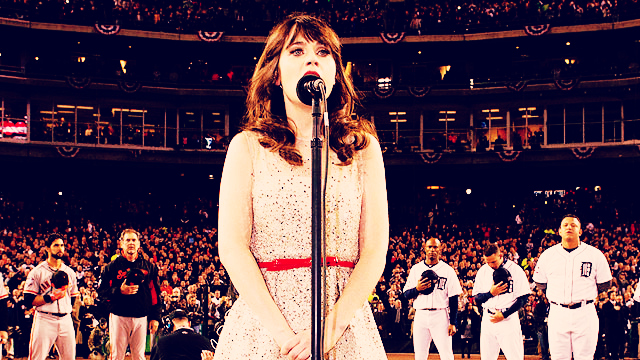 Recording artist Zooey Deschanel of She & Him had another shot at the national anthem when she sang "The Star-Spangled Banner" before Game 3 of the 2012 World Series between the San Francisco Giants and the Detroit Tigers Saturday October 27, 2012. Deschanel sang the anthem during the 2011 series as well.

Her classic alto voice was solid, although she was a little shaky on the sustained notes; overall, it was a solid performance.

Detroit native Jack White slipped onto the field at Comerica Park with relative anonymity on Saturday...when told that Deschanel was performing the anthem, White said: “Is she really? She’s a good gal.” MORE HERE
Posted by CDMartini at 10:07 AM