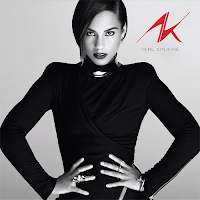 In her new video “Girl on Fire” from her upcoming album of the same name, singer Alicia Keys looks stylish, but she is also caring for an elder, entertaining kids, fixing meals, paying bills, spending quality time with a significant other, basically keeping the home fires burning. Release date is November 27, 2012.


Keys has unveiled the tracklisting for her upcoming album 'Girl On Fire'. She uploaded a clip on her Official Viddy Account of her writing the last two songs of the tracklisting in a notebook. See it HERE
Posted by CDMartini at 8:37 AM