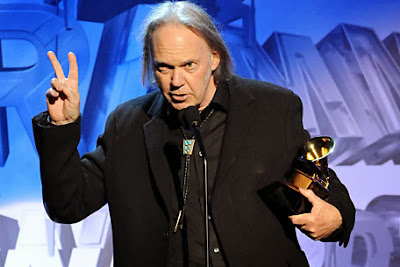 Back in 2011, Neil Young accepted his first Grammy award (for music*). * Technically, Neil Young's First-Ever Grammy Award was in 2010 for his Archives Box design. Plus he was the 2010 MusiCares Person of the Year.

Now we learn that Neil Young will be honored again by the Recording Academy Producers and Engineers Wing for his commitment to excellence and ongoing support for the art and craft of recorded music.

The event will be held on Tuesday, January 21, 2014, at the Village Studios in West Los Angeles. GRAMMY Week culminates with the 56th Annual GRAMMY Awards on Sunday, January 26, 2014, airing live on the CBS Television Network, at 8 p.m. ET/PT. MORE HERE