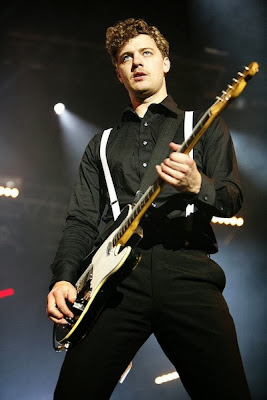 Nicholaus Arson is the guitarist of Swedish band The Hives and is known for his wild and animated performances.  Nicholaus founded the band with his brother in 1993 and they have since released 5 albums. This year they were on the bill for The Other Stage at Glastonbury as well the Hurricane Festival.  He has donated these Lloyd shoes in a size 8 to the Small Steps Project.


Nicholaus said, "I put on these shoes for the sake of rock'n' roll. I wore them at countless gigs all over the world during the Lex Hives touring cycle. Some people would consider them worn out. I consider them rocked in."

Small Steps Project is a UK registered charity that provides emergency aid, shoes and food to children and communities living on municipal rubbish dumps around the world. Then they provide support for children to take steps into education and adults into employment. MORE HERE
Posted by CDMartini at 9:50 AM