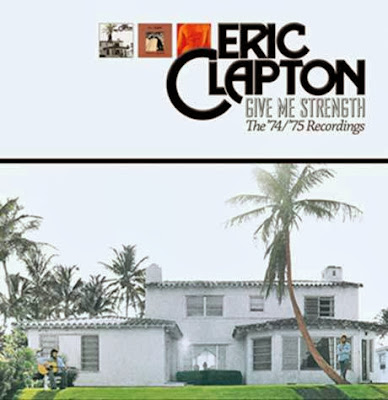 The fertile year that signalled the spectacular creative resurgence of Eric Clapton will be celebrated with the Super Deluxe release of Give Me Strength: The '74/'75 Recordings

This exemplary collection features no fewer than 29 bonus tracks (12 of them previously unreleased) from the extraordinary period between April 1974 and June 1975, in which E.C. reclaimed and enhanced his status as one of rock’s most legendary guitarists and singer-songwriters.

Give Me Strength houses expanded, remastered versions of his acclaimed studio albums from the period, 461 Ocean Boulevard

and There's One in Every Crowd

(now both remixed and expanded into a double CD), and a disc containing the complete, fabled Freddie King Criteria Studios Session. A sixth Blu-Ray disc adds a newly-available 5.1 Surround Sound mix of 461 and the original quadrophonic mix of both studio releases. MORE HERE
Posted by CDMartini at 8:22 AM

Email ThisBlogThis!Share to TwitterShare to FacebookShare to Pinterest
Labels: 461 ocean boulevard, criteria studios, e.c. was here, eric clapton, freddie king, give me strength: the '74/'75 recordings, there's one in every crowd