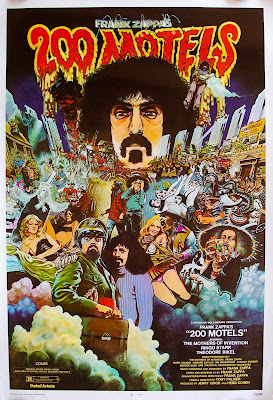 The history of Frank Zappa’s “200 Motels

” is much like its composer; enigmatic and riddled with disparate dimensions.

Originally culled from various musical scribblings written while on tour, and later, converted into a multimedia, surrealist rock symphony for film and stage, the legacy of “200 Motels

” has largely stemmed from its cinematic and recorded incarnations. The 1971 film version is a bizarre, hallucinatory slab of cult kitsch, while its double-LP soundtrack

exists more as a kaleidoscopic curio than a full-fledged album statement.

A partial-reading by the Los Angeles Philharmonic in 1970 and an infamously banned 1971 performance at the Royal Albert Hall represent the only attempts to present the work as an orchestrated whole — until last night (October 23, 2013).

With the work’s fragmented past firmly in mind, the L.A. Phil — in honor of the Walt Disney Concert Hall’s 10th anniversary — performed “200 Motels” in its entirety for the first time. MORE HERE & HERE

As soon as any video/audio becomes available, we'll post it.