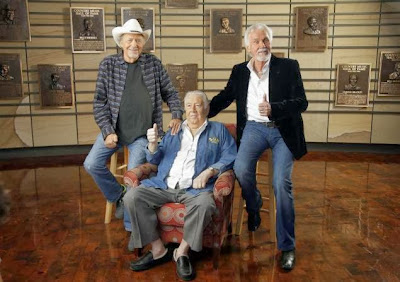 Kenny Rogers kept the mood light on the way into the Country Music Hall of Fame and Museum for Sunday's Medallion Ceremony (October 27, 2013), the formal event that inducted the Gambler singer, Bobby Bare and the late Cowboy Jack Clement into the Hall's hallowed ranks.

Each of the three men — Clement posthumously — was inducted into the Country Music Hall of Fame with performances from some of their all-star peers and friends. John Prine, Kris Kristofferson, Marty Stuart and the Fabulous Superlatives, and Emmylou Harris paid tribute to Clement. Bare was honored by Rodney Crowell and Harris, Buddy Miller, Kristofferson and John Anderson. Rogers' tribute came from Darius Rucker, Barry Gibb and Kelly Lang, Alison Krauss and Don Schlitz. MORE HERE & HERE
Posted by CDMartini at 8:52 AM