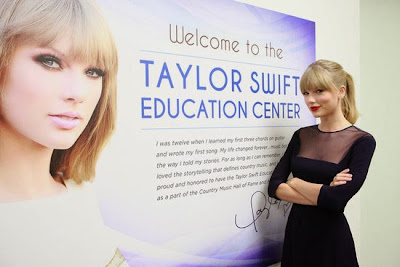 It may as well have been Taylor Swift weekend in Music City.

The pop star opened her $4 million Taylor Swift Education Center at the Country Music Hall of Fame and Museum on Saturday morning (October 12, 2013), and accepted her record sixth songwriter-artist of the year award from Nashville Songwriters Association International on Sunday (October 12, 2013).

The whopping new space in downtown Nashville will encompass more than 7,500 square feet on parts of two floors and will include three classrooms, a learning lab, an interactive children's gallery and a new attraction known as the petting zoo. No, it will not include llamas or baby goats, but it will allow visitors to road-test a host of different musical instruments. MORE HERE & HERE