Spend A Family X-Mas With X & The Blasters 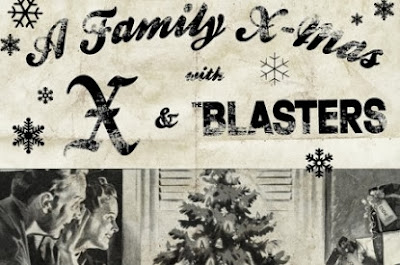 As X wraps up a month-long tour with the iconic band BLONDIE, the legendary leaders of a punk generation are now ready to announce their annual Holiday Shows.  This time, X will be joined by their longtime friends – THE BLASTERS in what is being billed as “A Family X-Mas”. Check dates HERE

Earlier this month, X saw a wealth of their classic catalog available digitally for the first time. On September 3, 2013 Rhino released a new digital box-set titled The X Collection: 1980-1987

On that same day, deluxe versions of their classic albums Los Angeles

, Under The Big Black Sun

also became available digitally for the first time.  All were released on CD in the early 2000s, but have never hit the digital domain. Standard and deluxe versions of their albums More Fun In the New World

will also be making their digital debut. The classic Live at The Whisky A Go-Go

and the 1995 album from The John Doe Thing, Kissingsohard

have been released as well. source