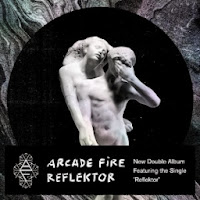 At a full moon masquerade in Brooklyn October 18, 2013, Arcade Fire arrived like a phantom of its own opera, materializing when fans least expected it from behind a largely overlooked black curtain set up against the far west wall of a cavernous venue.

It was just one of many times the band defied expectations at the semi-secret, instantly sold-out show, which drew a couple thousand golden-ticket holders to a warehouse-turned-art-space on a street lined with warehouses yet to be turned into art spaces.

Like their gig last month in Montreal, it saw them billed as "The Reflektors". The band's new album titled Reflektor