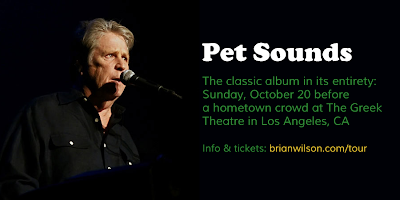 Following a surprise performance of the critically-acclaimed Pet Sounds album in New York City at the Beacon Theatre earlier this week, Brian Wilson will again perform the legendary album in its entirety this Sunday, October 20, 2013 before a hometown crowd at The Greek Theatre in Los Angeles for the last time on this tour.Get tickets HERE

The iconic duo of Brian Wilson and Jeff Beck have been on their co-headlining Brian Wilson & Jeff Beck Concert Tour, taking the legends’ historical musical collaboration through 20+ North American cities. MORE HERE
Posted by CDMartini at 8:54 AM