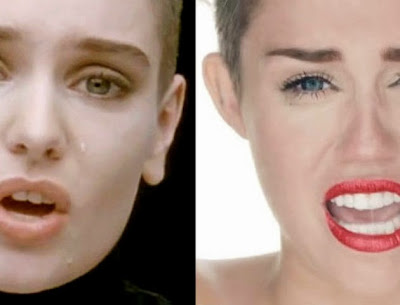 O'Connor's latest posts were a response to this tweet from Cyrus, which links to a photo of O'Connor's Twitter timeline from two years ago, a period when O'Connor says she was "unwell and seeking help" for mental-health issues.

Cyrus' derogatory tweet was inspired by O'Connor's out-of-the-blue first open letter to her earlier on Thursday, in which the Nothing Compares 2 U singer urged the Wrecking Ball singer to stop "allowing yourself to be pimped, whether it's the music business or yourself doing the pimping." source
Posted by CDMartini at 9:13 AM