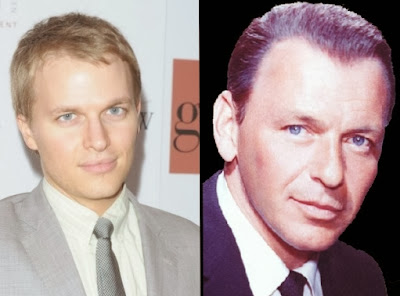 Could Frank Sinatra (above right) actually be the biological father of Mia Farrow's handsome son Ronan (above left) – whose father was always said to be Woody Allen?

Although no DNA tests were ever done, Ronan, a 25-year-old former Rhodes scholar who bears a striking resemblance to Ol' Blue Eyes, remains close to the late crooner's family, as does Farrow, Vanity Fair reports in its November (2013) issue, in an interview with the actress.

Asked point blank by Vanity Fair's Maureen Orth whether Ronan could be Sinatra's son, Farrow responds with one word: "Possibly."

According to the article, the Sinatra family remains a fan of Ronan, a Bard College and Yale Law School grad who has served in the Obama administration, founding the State Department's Office of Global Youth Issues.

"He's a big part of us, and we are blessed to have him in our lives," says Frank's daughter, Nancy Sinatra, 68. MORE HERE & HERE
Posted by CDMartini at 7:57 AM